For most people, the first thing that comes to their mind when they hear the word “Cordillera” is the Banaue Rice Terraces. It is a famous tourist spot known all around the world and was even called as the Eighth Wonder of the World. Officially, there are only Seven Wonders of the World which are must-see natural and man-made structures or places. The Eight Wonder is a place, structure, or natural creations comparable to the official Seven Wonders. The Banaue Rice Terraces has been nominated as an Eighth Wonder of the World because of its beauty, perfection, use, and antiquity. The Banaue Rice Terraces was built by hand almost 2,000 years ago by Ifugao ancestors. There are still debates as to the real age of the rice terraces because the stones used to hold the soil trace back to a much older date. The rice terraces cover several mountainsides, carved from the top down to the bottom of the mountain. It was an ingenious farming method devised by the Ifugao people due to lack of flat terrain to plant rice. It also makes watering more efficient as water from the top would flow down to every layer. Each layer is bigger than the layer before it, forming a staircase like pattern, which earned the Tagalog reference “hagdang-hangdang palayan.” 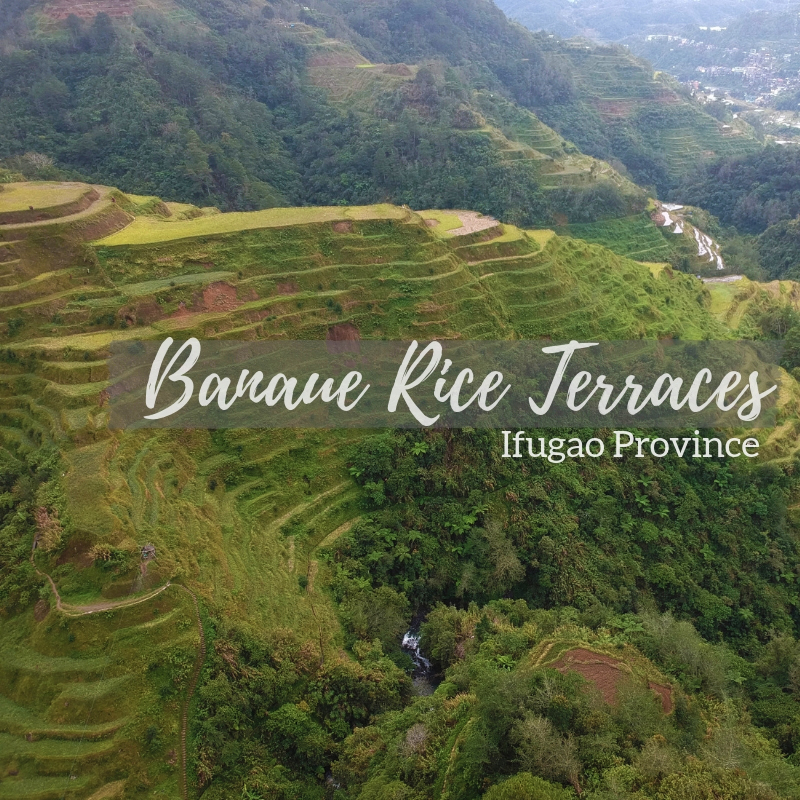 Banaue Rice Terraces is one of the declared Nation Treasures of the Philippines by virtue of Presidential Decrees 260 and 1505. It is a symbolism of the national heritage of the country and one of the areas being protected and conserved by stakeholders. Unfortunately, it is not one of the UNESCO World Heritage Sites.

The first thing to do upon entering Banaue, Ifugao is to visit the Municipal Tourism Center to pay the Php20.00 pesos tourism fee. They also offer maps and other relevant information as to transportation routes, lodging, and tourism packages. An important thing to note when going to Banaue is to bring cash as there are no banks or ATMs in the town. Banaue is only a town, while Lagawe is the capital of the Province where the banks are located. Before visiting the rice the rice terraces you may also drop by the Banaue Museum. From the junction or the town proper, you can follow the road going to the Banaue Rice Terraces. The distance is 4 kilometers, but travel time may vary due to vehicular traffic.

From the main road, you will follow a road to the left. Along the way, you will see different signs indicating the designated viewpoint or view deck from which you can see the Banaue Rice Terraces. Currently, there are four (4) famous viewpoints to witness the beauty of this breathtaking Banaue Rice Terraces. Usually the tour starts from the first viewpoint located in the bottom part or closer to the town proper up to the fourth viewpoint, which is called the Main Viewpoint.

Along the way there are several stores, souvenir shops, and picture-taking booths. There are allotted parking spaces for every view point, but if the parking spaces are full you can park on the road side as long you don’t obstruct traffic.

Still early for my 2:00PM bus trip to Banaue, I decided to walk from the terminal going to one of the famous local restaurants in Sagada, the Yogurt House. The Yogurt House is one of the famous restaurants or cafes in Sagada and known for its yellow building. I ordered beef cutlets with veggies and rice. The beef blends well with their red sauce mixed wth carrots, red bell pepper and Baguio beans.

BTW, per advise of a friendly local I met in the hostel where I am staying, I booked my bus trip in advance (1 day ahead). Actually, this bus trip is routing Quezon City but they accept passengers dropping by at Banaue Terminal. It is advisable to book in advance as the seats get filled up very fast. There are only 4 scheduled trips of Coda Lines everyday. Another option is to take a public utility vehicle routing Sagada to Bontoc then take another ride from Bontoc to Banaue. Of course, taking the direct air conditioned bus from Sagada to Banaue for a more or less 3-hour trip is less hassle and quite comfortable.

I spent more than an hour in the Yogurt House – not just for lunch but also for the beautiful exhibit of photos on their wall.

Our bus left Sagada at the exact scheduled time. The zigzag road, beautiful long river, and wonderful views along the road kept me awake. I took note of the two beautiful rice terraces we passed by before the town proper of Bontoc, which is another one of my reasons to go back to Mountain Province.

It was around 3:39PM when we passed by at the amazing Bayyo Rice Terraces. How I wish I could ask the driver to stop for a while. We had 2 stopovers before we reached Banaue. First is the 30-minute stopover in a vegetable market area (I forgot the name of the place) where some passengers bought fresh produce – mostly cabbages and carrots. I don’t have any clue on the name of the spot of our second stopover. It’s where the drivers and conductors fetch their drinking water from the natural spring along the road. It’s a memorable spot for me because of the beautiful view of a lone house in the middle of the mountains. The stopover is just 5 minutes and I forgot to take shots using my DSLR, but I hope my smart phone will do justice.

We arrived in Banaue Town at 4:30PM. The bus stop is actually in front of the Municipal Tourism Office of Banaue. I paid the tourism fee and asked if touring the terraces is still possible. The kind officer nodded and assigned me to a driver for a tricycle tour. The tour costs Php200.00 and includes the four famous viewpoints of the Banaue Rice Terraces. Unfortunately it’s already dark in Banaue at 5:00PM. I took pictures but it’s already dark specially when we arrived in the in “20 pesos bill spot”. I decided to reschedule my shoot the following day with a different plan…

It’s officially my Day 1 in Banaue – exempt my failed (unscheduled) photo shoot the other day. I woke up at 7:30AM. Before heading to my main plan in the itinerary, I let myself enjoy the view of Banaue Town from the restaurant of Uyami’s Green Lodge. A typical Pinoy breakfast of fried rice, daing na bangus, sunny side egg and brewed coffee for Php140.00 set my mood for a different shooting plan in this foggy morning of January 18.

I checked out at Uyami’s at around 10:00AM and went back to tourism office to book for another tricycle ride. But this time it’s different. The very accommodating tourism officer remembered me and asked how my experience was the other day. I just smiled and asked her to book another tricycle ride going back to the main view point – this time just for a one way ride. I hired a tricycle for Php 100.00 up to the main viewpoint and I plan to just walk going back to the town proper. It’s a 7-km walk from the main viewpoint going to the town proper, yep, to reshoot and to try also unfamilliar vantage points.

Hopefully, there’s a good internet signal so I could catch also PIKACHU. No not Thanos, since he could be in Batad preparing for war versus the Avengers? Maybe!

The Main Viewpoint. I arrived at the main viewpoint around 10:00AM. The weather was not good! The rain started to fall. While waiting for the rain to stop, I had the chance to talk to two beautiful ladies, the 82 year-old Urtago and the 85 year-old Camote Kuyapi. They are two of the original workers in the rice terraces but due to old age and weak body they can no longer perform their old farm works. They agreed to be photographed.

I just stayed at the souvenir shop in the main view point, waiting for the rain showers to stop. After 15 minutes, the rain stopped, the other two foreign tourist decided to proceed with their trek up to the terraces. Two large groups of tourist arrived and left but I was still busy shooting and finding the perfect color and composition of the terraces.