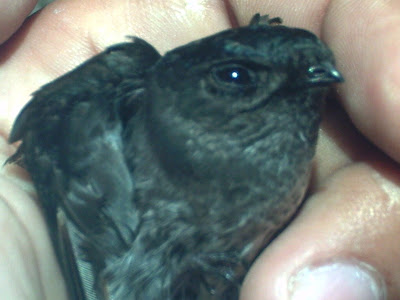 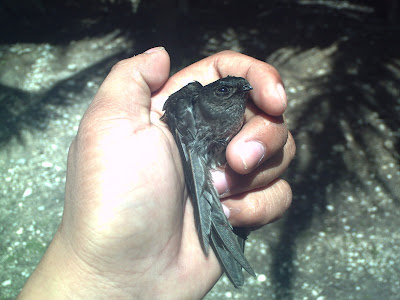 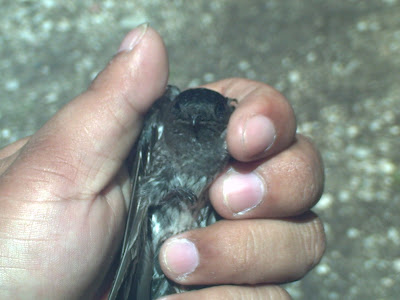 I apologize for accidentally catching the bird (out of curiosity) while watching my favorite Bisayan TV show one Saturday morning at our staff house in Oslob (Cebu).

This type of bird belongs to swallow birds specie. There is one specie of swallow that is commonly nesting in caves of Palawan. The bird is locally known as balinsasayaw - producing the highest paid/ most expensive cooking ingredient. A kilo of the bird's saliva "just" costs 25,000 up to 200,000 pesos or US$5,000 and the soup made from Balinsasayaw's Saliva costs 50000 pesos??? Wew!

By the way, I didn't hurt the bird and freed after taking photographs.

The swallows are passerine birds in the family Hirundinidae which are characteriZed by their adaptation to aerial feeding. Swallow is used colloquially in Europe as a synonym for the Barn Swallow. This family comprises two subfamilies: Pseudochelidoninae (the river martins of the genus Pseudochelidon) and Hirundininae (all other swallows and martins). Within the Hirundiniae, the name "martin" tends to be used for the squarer-tailed species, and the name "swallow" for the more fork-tailed species; however, there is no scientific distinction between these two groups.[1] The family contains around 83 species in 19 genera. The swallows have a cosmopolitan distribution across the world and breed on all the continents except Antarctica. It is believed that this family originated in Africa as hole-nesters; Africa still has the greatest diversity of species. They also occur on a number of oceanic islands. A number of species are long-distance migrants. A few species of swallow and martin are threatened with extinction by human activities, although other species have benefited from human changes to the environment and live around humans.
Scientific classification
Kingdom: Animalia
Phylum: Chordata
Class: Aves
Order: Passeriformes
Suborder: Passeri
Family: Hirundinidae
Vigors, 1825
source: http://en.wikipedia.org/wiki/Swallow
Posted by Traveling Morion