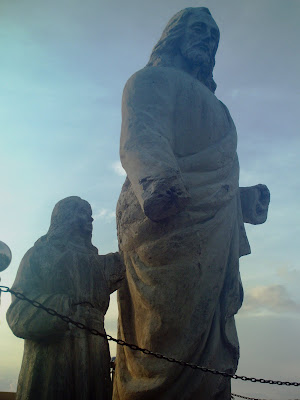 Our group -Kua Alvin, ate Bons, Cris, Kua Cezar, Balance and I arrived at Liloan Port (Santander, Cebu) after almost 30 minutes of sea travel via fast-craft from Negros Oriental. Out of curiosity , after we read the story featured in a local Cebu newspaper, our group decided to have a short  stop-over in Municipality of Samboan to visit and see the  "news maker" - the giant concrete statue of  St. Joseph. According to common stories circulating about the statue, it was found after a female resident of Badian (nearby town) had dreamt of it and where it is exactly  buried. The statue is about 10 feet in height and three to four feet in diameter. It was found buried at the playground fronting the school of St. Pius High School and just behind the St. Michael the Archangel church.
There are lots of question exist and still unanswered regarding the discovery of the said statue…
“How it is buried there? Who made it? When does it exist?