Tired of the daily grind? Why not breathe some magic into your life with a getaway trip to Marinduque? Lucky for you, Marinduque is now more accessible more than ever. Before, you would have needed an 8 hour-long trip through land and through sea to reach this place. Now it’s just less than one hour away via air travel. And when you arrive at this hidden gem, you’ll be spoiled with choices for all the things you can see and do. You can schedule your trip and attend the exciting Moriones Festival, unwind at the beautiful Poctoy White Beach, be one with nature at Mount Malindig, and many more! 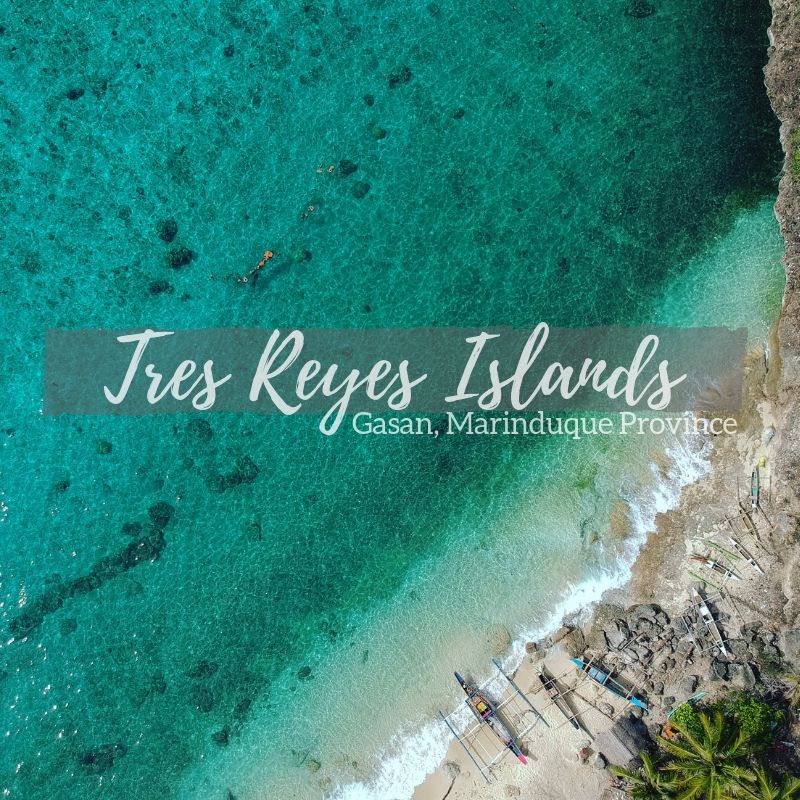 But most of all, you’ll definitely want to go island hoping through the Tres Reyes Islands. As the name suggests, it’s made up of three islands namely: Gaspar, Melchor, and Baltazar. Tres Reyes translates to three kings or “tatlong hari,” hence the names of the islands have reference to the bible.

Of the three islands, Gaspar Island is the one you don’t want to miss. It’s the largest among the three islands and the most popular among tourists. Its main feature is that it has a beautiful area of coral beach which makes it perfect for bumming around and taking iconic vacation photos. And for the history buffs, you have to know that in 1981, a Chinese vessel was found near the island, which contained many artifacts worth millions of pesos. BTW, if you are interested you can see them at the National Museum’s Underwater Archeology division.

If you’re a little bit worried about going too far from land, you’ll want to visit Gaspar Island – a more or less 30-minute boat ride only from the docking area in Barangay Pinggan, Gasan. It’s the one nearer to the mainland of Marinduque. And unlike in Melchor and Baltazar islands, there are cottages made by locals on this Island. And of course once you’re settled in your cottage, you’ll definitely want to go for a swim. But just be careful and remember to not go too far off from the island because the locals say that the current is strong near this island. There’s a small community on the island from whom you can buy some snacks and souvenirs. And if you haven’t had enough of the place, you can even stay the night as long as you bring your own tent or rent the cottage.

Melchor Island is located in between of Gaspar and Baltazar Islands. The island’s coastal area is a little bit rocky and docking of boat is a little bit challenging especially during rainy and habagat seasons. The area is also known for occurrence of unpredicted strong current of water so be extra careful. The beautiful cliffs, turquoise water, and abundance of marine life characterize the island. Coconut crabs are also be found in the island.

The last scenic spot is Baltazar Island. If you’re looking for something a little bit more adventurous on your vacation, you’ll definitely want to visit Baltazar Island since it has an exceptional dive spot which is also the most popular in the province. Even better, the dive spot gives you direct access to an underwater cave. Not only do you get an adventure, but also an amazing underwater view, all in one place.

Overall, you definitely wouldn’t want to miss out on the magical Tres Reyes Islands of Marinduque.

Our plane, as expected, arrived very early in Gasan Airport – that’s around 6:20 in the morning. It was an a good and short flight from NAIA Terminal 4 compared to usual transport by land and sea from Metro Manila via Lucena City. We immediately looked for the tricycle terminal that would take us to the jump-off point going to Tres Reyes Islands in Gasan - our first destination for this 3-day DIY Marinduque trip.

The tricycle driver brought us to Barangay Pinggan, the jump-off point to Tres Reyes Islands. He introduced us to Manong Ronel Saludes (+639396226765), the boat operator. Gaspar Island or locally called as “Pulo” is our first spot and the nearest island from the mainland which is more or less 20 minutes of boat travel.

The small but charming sandbar of Gaspar Island welcomed us. There is a community in the island with one of the most accommodating locals I have ever met. There are no restaurants or food stalls in the island but the locals are kind enough to cook for tourists. There is a small sari-sari store in the island in case you need to buy something. Also, you can buy fresh catch-of-the day from the fishermen.

I was actually surprised when I saw coconut crabs (locally called as Igod) caught in the island. It was offered to me for Php700 per kilo but I humbly declined realizing that coconut crabs may be on the list of endangered species.

As suggested by one of the locals from the lone sari-sari store near the beach, I walk a little bit farther going to the docking area of fishermen’s boats. There I meet 3 kids playing – they smiled and greeted me with good morning. This part of the island is a little bit rocky and windy. I flew my drone cam and witnessed the beautiful rock formations blending nicely with the clear turquoise water.

The heat of the sun began to rise at 10:00 AM and habagat waves started to roar wild. I asked Manong Ronel to drive us back to the mainland (dock area in Barangay Pinggan) as visiting Baltazar and Melchor Islands are not possible for now because of the habagat. I realized, maybe, it will be reason to set another schedule and go back to Gasan. BTW, according to the locals, March to May (summer) are the best months to visit the three beautiful islands of Tres Reyes.

We spent 3 hours in the island, just enough for me to take photographs and drone shots of the island. The bird’s eye view of the shifting sandbar is mesmerizing!

It’s only 20 minutes boat ride from Gaspar Island to the dock area in Barangay Pinggan. Manong Ronel guided us going to the lone karinderya (local restaurant) in the area. We ordered dinuguan and kalamares plus rice and softdrinks (that’s for less than 150 pesos) for our late breakfast and early lunch. My daughter, Nicole Audrei, joined me in this 3-day Marinduque getaway.


Things to Do in Tres Reyes Islands and other interesting spots in Gasan, Marinduque

There are a lot of accommodations in the town of Gasan, mostly beach resorts. Since we don’t have any itinerary in Gasan in the afternoon, we decided to book our accommodation in Boac, the capital of the province and a neighboring town of Gasan. We booked a room for a night at Boac Hotel, heritage hotel located in the central area of the town where arrays of other heritage houses (Vigan feels) are also located. It is also a walking distance from another must visit in Marinduque, the Boac Cathedral. The ground floor of the hotel is a souvenir store and a restaurant serving famous Marinduque cuisines.


HOW TO GET THERE

If you’re coming from different towns of Marinduque Province

From Visayas and Mindanao

SAMPLE ITINERARY
Day 1
5:30AM – ETD, flight from NAIA 4 to Gasan Airport
6:20AM – ETA at Gasan Airport
6:30AM – Travel to Barangay Pinggan, Gasan, the jump-off point to Tres Reyes Island
6:50AM – 8:00AM - Breakfast at Barangay Pinggan/ETD to Tres Reyes Islands
8:30AM – ETA at Gaspar Island/swimming/roaming around/beach time
12:00PM- Lunch in Gaspar Island (can be arranged with the locals)
1:00:00PM onwards – Island hopping at Baltazar and Melchor Islands
3:30PM – Travel back to mainland (Barangay Pinggan)
4:00PM – 5:00PM - ETA at Barangay Pinggan/wash/ wait for jeepney bound to Boac
5:45PM – ETA at Boac/check-in at hotel
6:30PM – 7:30 PM – photowalk and visit to heritage houses in Boac
8:00PM - onwards- Dinner /lights-off
*** We explored Marinduque for three days. The continuation of this sample Marinduque Itinerary will be posted on the next article – thank you!