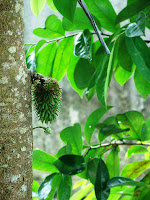 TRIVIA: Soursop (English) /Guyabano's scientific name is Annona Muricata. The wonder fruit known as The Natural Cancer Cell Killer is  native to Philippines. Scientific studies proved that Guyabano tree's bark, leaves and fruits contains one chemical that is 10,000 times the potency of the chemotherapy drug Adriamycin.