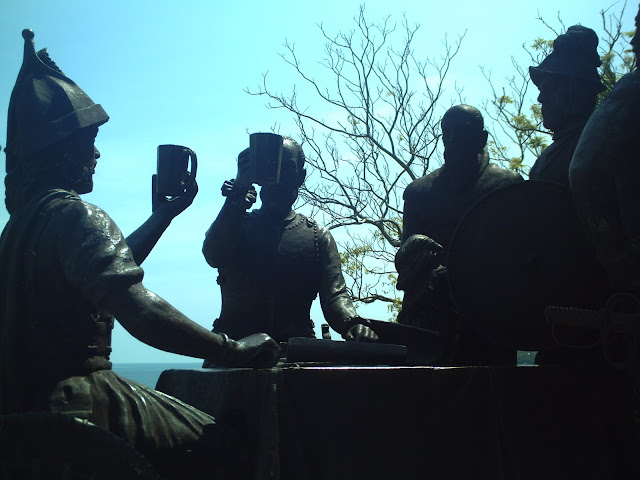 Sanduguan Shrine is a commemorative site of the Sanduguan (a blood compact) between Datu Sikatuna -the chieftain of Bohol,  and Miguel Lopez de Legaspi -Spanish conquistador on March 16, 1565.  Symbol of alliance and friendship, the two leaders made a cut in their arms and mixed drops of their blood with wine then drank it.
Sandugo (Visayan) or Isang Dugo (Tagalog) means "One Blood".

The Shrine is composed of statues made from brass. The scene defects Sikatuna seated at the left side of the picture raising a cup as if in a toast. Legazpi is in the middle with three of his men beside him, including a priest.


HISTORY. In 1521, Portuguese explorer Ferdinand Magellan became the first person from Europe to reach Asia by sailing west, a voyage of which he would meet an untimely death in the island of the Philippines. Spain sent expeditions to colonize the East Indies in their competition with Portugal to seize control over the spice trade. However, all of these expeditions failed. It was not until Miguel López de Legazpi, sailing from Mexico with five ships and five hundred men, reached the Philippines in 1565 and a Spanish settlement was established. López de Legazpi was greeted by hostile Muslim tribes opposing a foreign invasion. His attempt to land on the island of Cebu resulted in the death of one of his soldiers prompting him to explore another island and seek trade with various tribes.
Sailing south toward the island of Mindanao, López de Legazpi's fleet encountered high winds forcing them to sail northward to the island of Bohol. There, he captured a vessel from Borneo whose Malay sailors informed the Spaniards that the natives inhabiting the region traded with people from Borneo and Indonesia. Arriving in Bohol, López de Legazpi noticed the hostility of the people. The Malayan servant explained that such hostility was due to the expeditions conducted by the Portuguese from the Moluccas islands. In 1563, Portuguese fleets arrived in Visayan waters and enslaved about 1,000 inhabitants.[4] López de Legazpi, with the help of the Malayan sailor, explained to the tribes in Bohol that they were not Portuguese and that they had come to the islands to trade. Upon learning this, the chieftains and their tribes became friendlier and welcoming to the Spaniards. source: wikipedia

The Inscription in the Monument. “About the middle of March 1565, the fleet of Captain General Miguel López de Legazpi anchored along these shores. In the course of this visit, López de Legazpi entered into a blood compact with Datu Sikatuna for the purpose of insuring friendly relations between the Spaniards and Filipinos. Each of the two leaders made a small cut in his arm, drew a few drops of blood from the incision, mixed it with wine, and drank the goblet containing the blood of the other. Thus was the first bond of friendship between Filipinos and Spaniards. It is observed in the following manner: one from each party draws two or three drops of blood from his own arm or breast and mixes them in the same cup, with water or wine. Then the mixture must be divided equally between two cups and neither person may depart until both cups are alike drained.”