The Pagsanjan Falls is one of the most popular and famous waterfalls in the Philippines, with many mistakenly thinking that it is the highest of all the waterfalls in the country. In truth, it might belong to the top 10 but there are at least 6 other waterfalls that are taller or higher than Pagsanjan. Of course, that does not make this stunning water body less majestic and it still holds the distinction of being the most visited and best known. 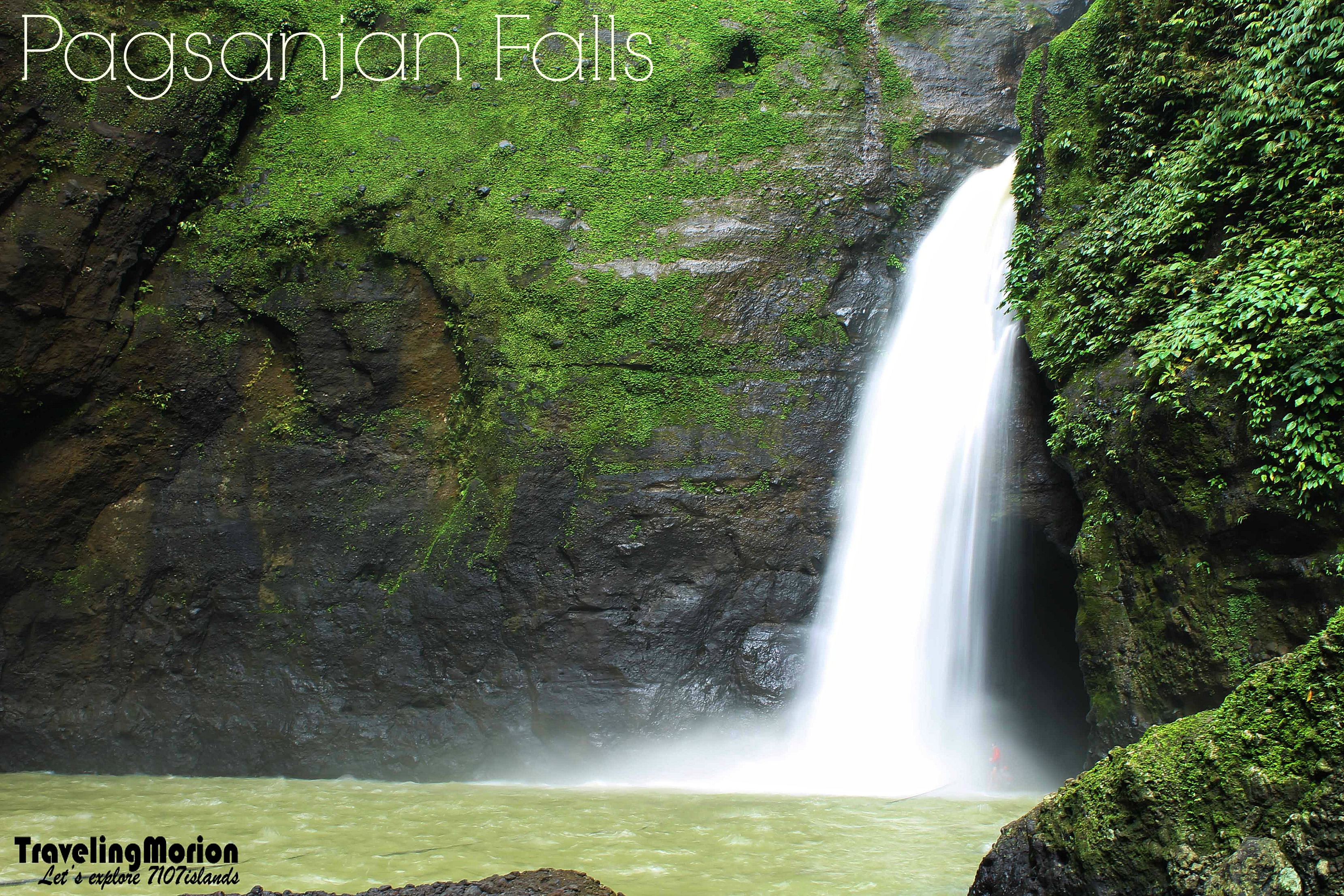 Even though the falls is named as “Pagsanjan”, the main falls is actually not located in the town of Pagsanjan but in Cavinti. However, the most popular way to reach the falls is via Pagsanjan so that the name stuck. In 2009, the officials of the municipality of Cavinti tried to have the name of the falls changed to “Cavinti Falls” but this was rejected by the Sangguniang Bayan.

For most travelers, it doesn't really matter whether the waterfalls is in Cavinti or Pagsanjan because they would still love to visit it regardless of name or location.

One great thing about 2 towns having access to the waterfalls is that there are also 2 routes available for tourists to reach this stunning work of nature.

Since the participants were coming from different destinations, we decided to meet-up in a fast food chain at Sta. Cruz. We’re eight in the group and I was the first one to arrive - medal for me! Then after 15 minutes Binatang Lakwatsero and Richard Ace followed – fresh from their Quezon Province tour. On my last sip of coffee, Glen, Jherson, Chino, and RJ arrived. PaulaO (the snow white) then came after 30 minutes- yeap, 30 minutes kaming nganga  hehehe.

From Sta. Cruz we rode in a jeepney bound to Pagsanjan to meet the local tourism officer (I forgot his name). He advised us to buy foods before heading to the destination since there are no stores/canteens within the Pagsanjan Falls area. We decided to buy packed lunch in Binalot sa Dahon, a restaurant in town serving native delicacies packed in banana leaves. We picked steamed tilapia, adobong baboy, ginataang puso ng saging, and minatamis na saging - truly SARAPinoy!. 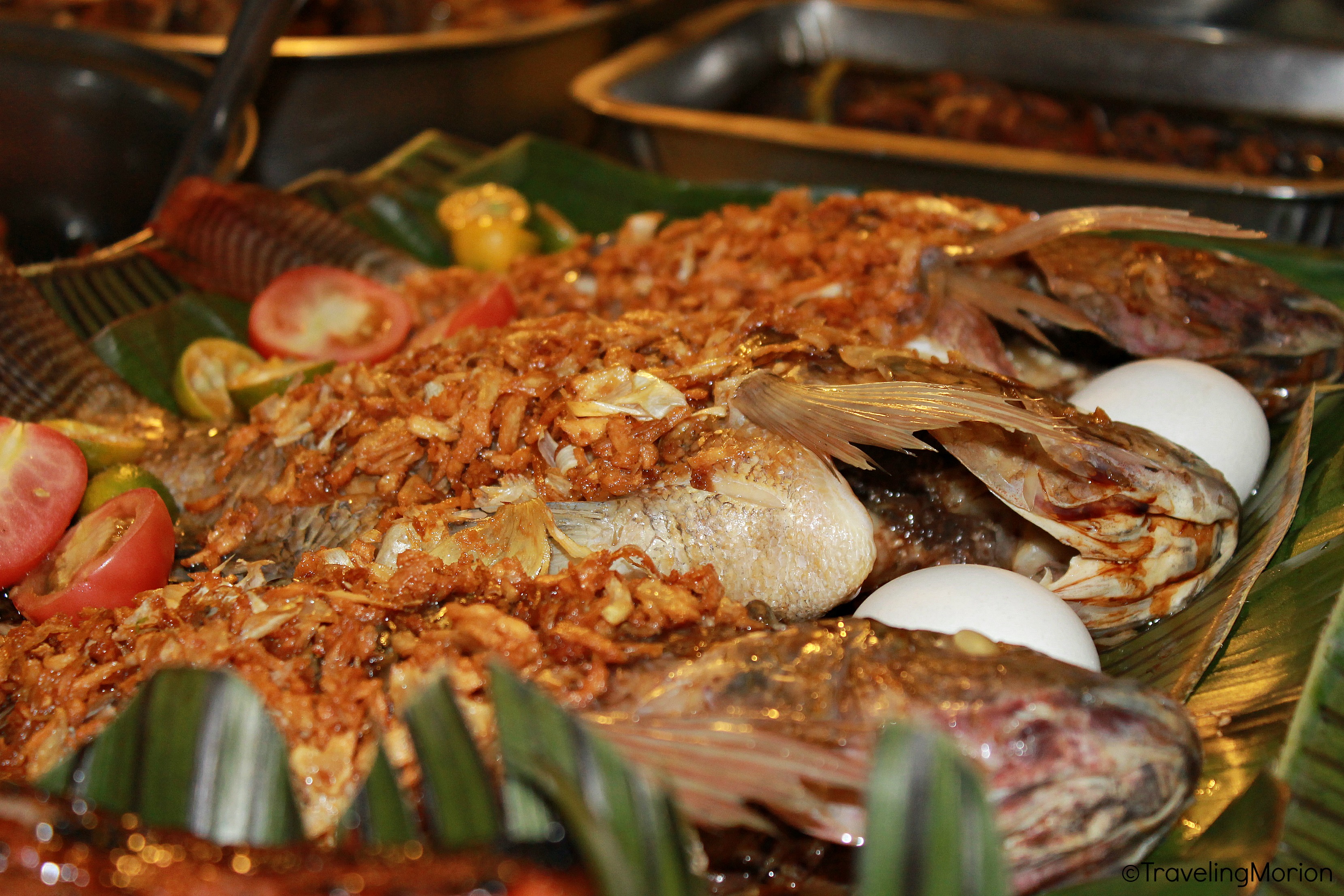 From Pagsanjan, we rode again in a jeepney – this time bound to Cavinti. Unfortunately, most of the passing jeepneys are full-seated already so we decided to top-load! After more or less 20 minutes, we arrived in crossing Cavinti. From the crossing, we ride in a tricycle going to the jump-off point to the falls. 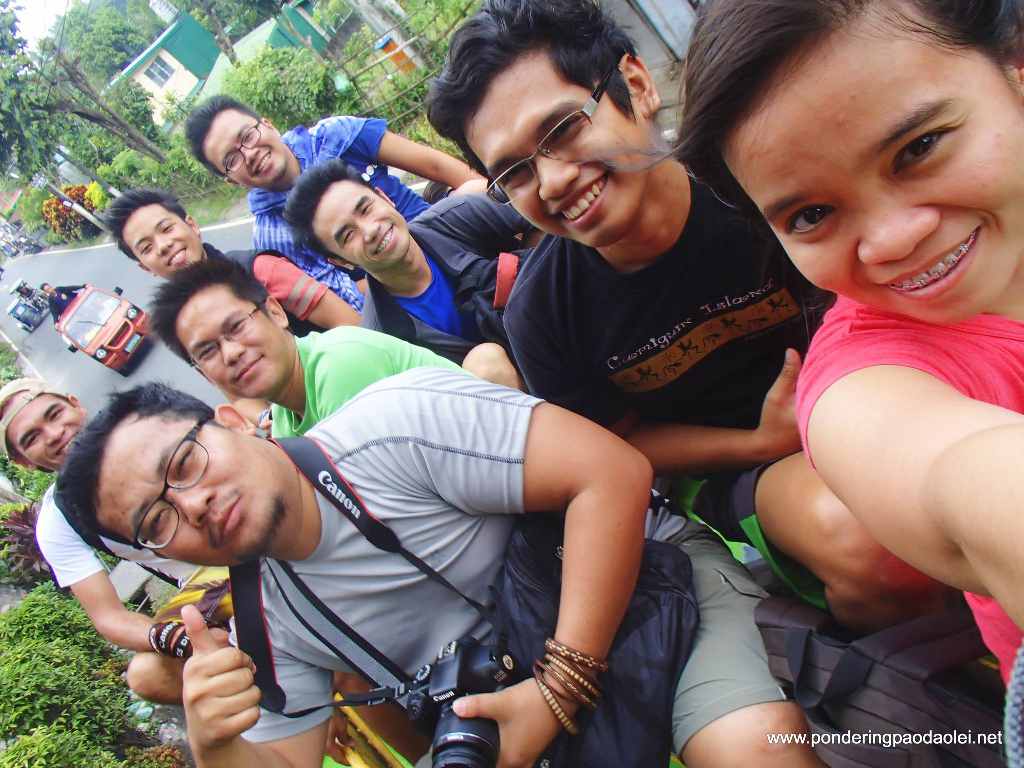 After paying the necessary fees/permits amounting 270 pesos, much cheaper to 1200-1500 Php if via boat from Pagsanjan, we then started the more or less 45-minute trekking and rappelling - with “fun and laughter!"

The route via Cavinti is indeed challenging and really full of adventure. Yeah, I should say that this route is not for fainthearted and those with weaker heart and lungs. Just imagine two stations where you need to rappel in 90 degrees point  (twice) to get down, and take note that the most challenging episode of this journey is when going back! 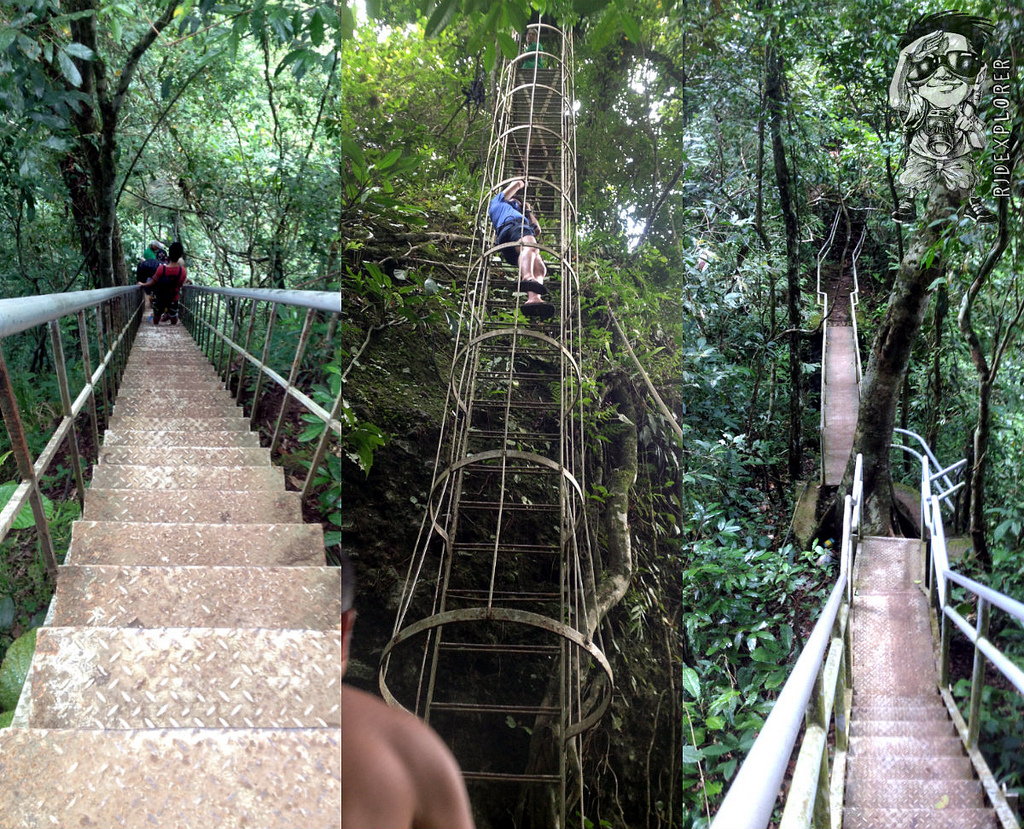 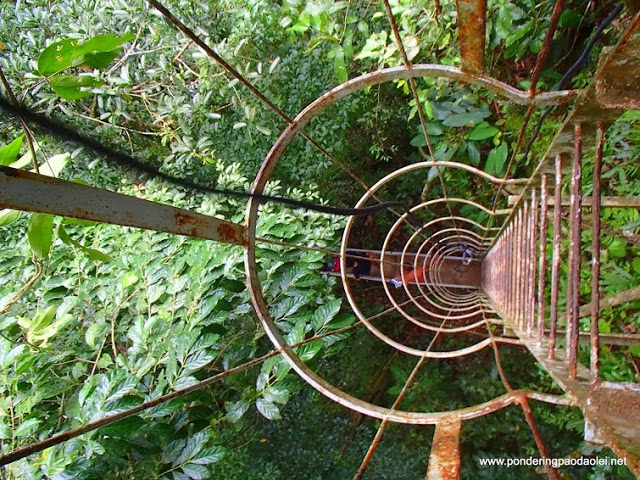 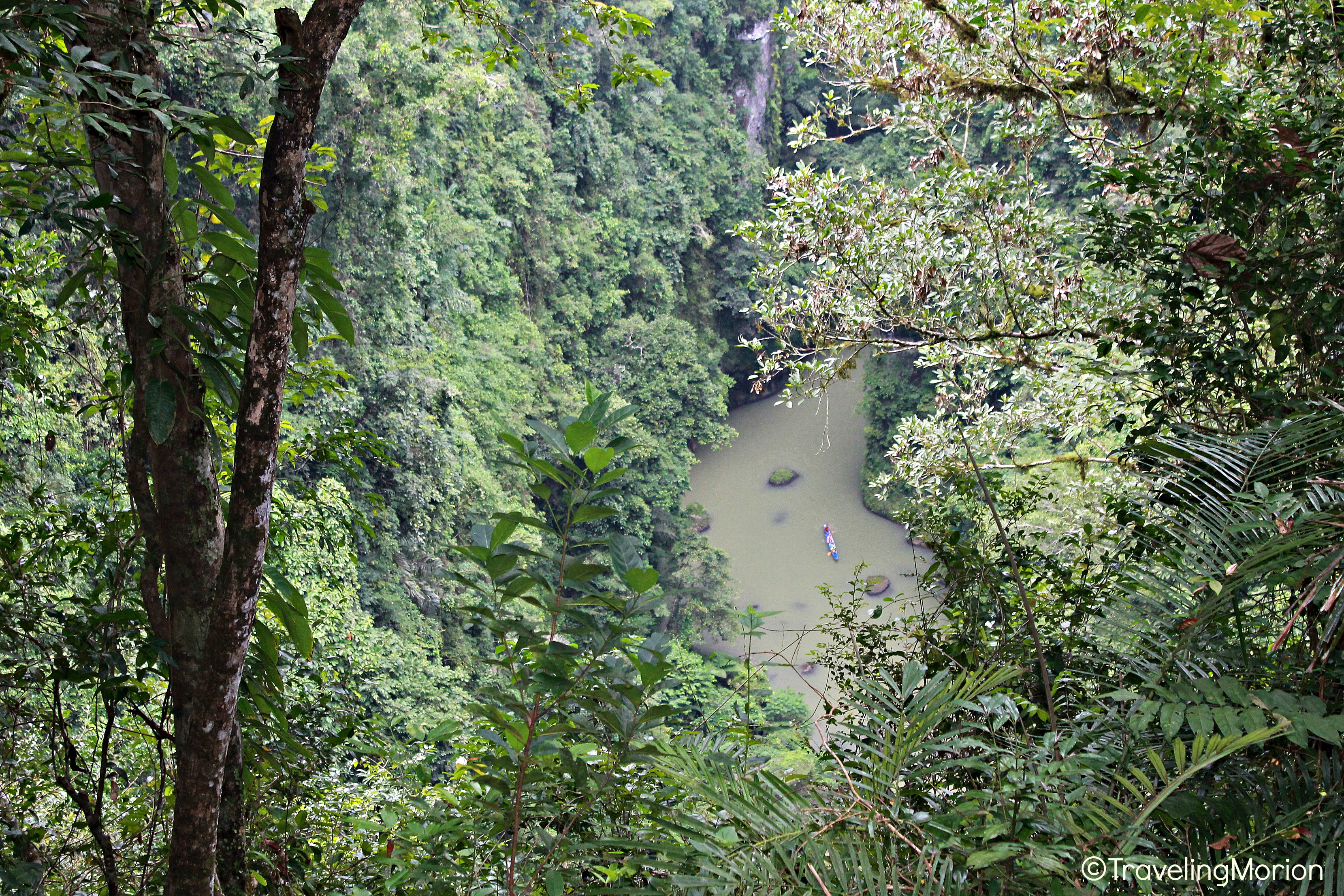 Who doesn't know Pagsanjan Falls in Laguna? Yeap, it is one of the prominent Philippine spots mentioned in Sibika at Kultura Unang Baitang during Elementary days.

Back in 1932 when the Philippines was still a territory of the US, the country released a stamp labeled “Pagsanjan Falls” but actually featured a picture of Vernal Falls in Yosemite National Park, California. The incorrect stamps were recalled but a corrected image was not released anymore. 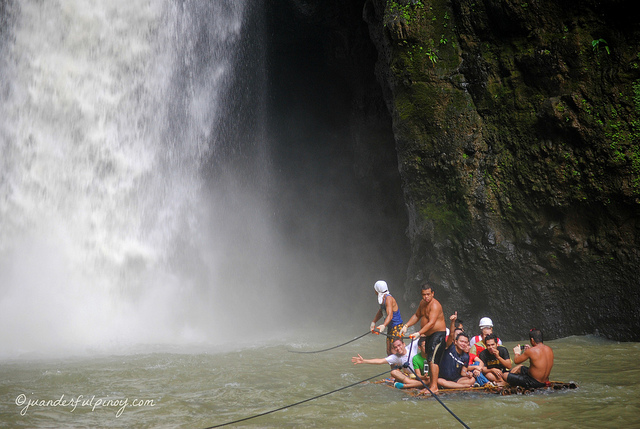 The origin of the falls is said to have been legendary, as is the nature of many waterfalls across the country. According to folklore, brothers Balubad and Magdapio lived on the banks of Bumbungan River. At the time, there was no falls but the river had a twin, Balanac.

After living abundantly for years, the brothers experienced severe drought which dried up the rivers. Balubad died of thirst so Magdapio buried him on a slope that overlooks the river, an area now named after Balubad.

Magdapio ventured upstream but still could not find water. Already angry with the gods for not hearing their prayers, he hurled a cane among the scattered rocks. The spot hit by the cane became a spring from where he drank and regained strength. The spot grew until it became the majestic Pagsanjan Falls.

How to Get There?


Tips: You do NOT have to hire a tour guide when using the Cavinti route. There are people who will assist you inside the park. As much as possible do not use this route when you're alone.Bring extra clothes, water and food as there are no stores nearby.